FREE SHIPPING ON ORDERS OVER $20

The Daiwa 2020 Saltiga Spinning Reels is the new pinnacle in spinning reel innovation. Featuring a monocoque body, the 2020 Saltiga allows for a much larger main gear than competitors and helps keeps gears inline with one another reducing wear on the teeth and adding reliability to the reel. The monocoque body also decreases the amount of parts used in the reel, and eliminates body screws adding increased water resistance and decreasing the possibility of corrosion.  The main gear is now 12% bigger than the previous generations, but comes in 10g lighter.  The 2020 Saltiga also incorporates Daiwa's proprietary Magseal technology on both sides of the drive gear as well as in the line roller creating a highly effective seal against both water and other elements while not inhibiting any of the reels free-spinning.  Daiwa has now incorporated an aluminium rotor into the reel which gives the reel 2x more rigidity than the Zaion rotor incorporated in the previous generation.  New drag washers were also added to the reel giving 10x more durability against wear than the previous generation.  The 2020 Saltiga adds more drag washers to the stack than the previous generation but are also smaller in diameter, decreasing overall weight, and spreads the load more evenly across them.  This gives powerful drag outputs ranging from 55 to 66 pounds of drag, depending on the model, while remaining silky smooth and responsive to fish pulls.  The spool also features a newly designed ABS spool for long distance, tangle free casting with braided line.  The reel is easily switched between left and right hand retrieve.  Made in Japan. 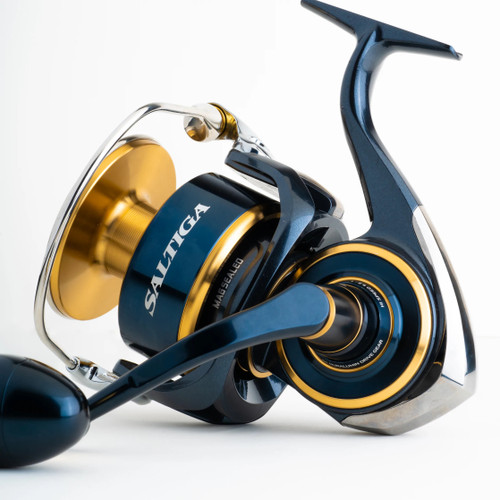